Back at the start of June I received a very intriguing and somewhat cryptic phone call.

“Hi, is that Dave? It’s Jenna here from BBC Coventry & Warwickshire, I wondered if you might be interested in getting involved in an event that we’re running on the 15th?”

“I’m afraid that information is embargoed. Can’t tell you.”

Thus began yet another chain of random events that culminated in possibly the single most surreal morning I’ve ever experienced.

The reason for the cloak-and-dagger stuff, as I eventually learned (having been sworn to secrecy under pain of little short of death) was that BBC Music Day would be placing 47 blue plaques on locations significant in British music – all of which were closely-guarded secrets right up until the day.

Here in Coventry, a plaque would be placed on the childhood home of Delia Derbyshire, pioneer of electronic music. As regular readers will know, I’d recently done a public engagement event for Delia’s 80th birthday at The Herbert Art Gallery & Museum in Coventry – it was the radio show that I’d appeared in to promote this event that brought me once again to the attention of the local chapter of Auntie Beeb. The event would take place during Vic Minett‘s morning show on Thursday 15th June.

This left me in an interesting position. I had a minimum of 3 pieces of pre-recorded music to organise for the show, plus a live set… and no time. Being already committed to Coventry Pride, my only full weekend was completely booked and I’m one of those unfortunates that have to work a day job to support my family and synths. So, I manfully set about the only course of action available – namely, pulling a bunch of late-nighters, shamefully neglecting my family for a solid week and being moderately knackered and grumpy at work. I completed the recording brief at 11pm the night before air – but with no time to rehearse or prep a set. It was gone midnight before I had the gear packed and ready to go.

Dear reader, I must confess… one the day, I winged it.

This information is embargoed; don’t tell the BBC.

Another thing had come up on Thursday. Whilst listening to Vic’s show on earbuds in the office, waiting for the announcement (which would mean that the embargo was lifted and I could therefore, finally, tweet about the thing) Vic mentioned that the unveiling would be carried out by “Doctor Who” (Delia having, perhaps most famously, orchestrated and recorded the the original version of sci-fi show’s theme tune).

My immediate reaction was, of course, HOLY SCREAMING BATSHIT I’M GOING TO MEET PETER CAPALDI OMFG OMFG OMFG I’M NOT COOL ENOUGH FOR THIS, but it turned out that the Doctor in question would be none other than Colin Baker – who, whilst not my favourite of the Doctors (this distinction going to the peerless Tom Baker), would do quite nicely.

Mrs Morocco is the family Doctor Who nerd. Envy was expressed. We’ll leave that right there.

An early start to make myself presentable enough for radio was followed by loading the car (no fun at all when on the wrong side of sufficient caffeine), dropping Morocco Small Boy with his childminder and navigating my way down to Coundon in commuter traffic. Arrived on time; 1 point for the home team.

Fortunately the BBC Coventry & Warwickshire team were already on site, with a gazebo, Outside Broadcast van, PA, power & (most critically) coffee all in place and waiting. Perfect. I set up, caffeined-up, chatted with Engineer Eddie, Jenna, Vic and Andy, who now owns the house that Delia grew up in. Andy’s a musician too, so we spent a while geeking out over noisy toys.

Colin Baker and Nicola Bryant (who played Peri in the show, one of The Doctor’s long-suffering assistants) arrived. Mr Baker instantly won my affections when he was introduced to me, with a solid handshake accompanied by a thunderous “Hello Morocco Dave, I’m High Wycombe Colin!”

At some stage pastries arrived, which can only ever be a good thing. I can’t honestly remember much of the order that things happened in. Did the Doctor and Peri arrive before the show started, or after? No idea. I blame it on residual time-energy or reversed neutron flows or some such.

I spent the next three hours noodling with synths, making a constant, vaguely entertaining noise, some of which made it to air as background noise-age under interviews and so forth. I had no real idea when this was happening, other than some pointing and handwaving from producer Jenna, but I understand it all went well. In addition, 2 of 3 prerecorded pieces were used and I got a couple of talky spots, too. The whole thing was amazing to be part of, a constant buzz of activity, overheard one-sided conversations with the studio, people running around with cryptic messages scribbled on whiteboards and the omnipresent clock. Live radio is amazing, like a slowly-unfolding explosion in a spaghetti factory, where the trajectory of everything is preordained and timed to the millisecond.

Eventually I managed to get out from behind the machines for a few minutes. Pastries were consumed. A camera crew arrived from the local BBC TV news. Pete Chambers from the Music Museum rocked up, a whole shed-load of schoolkids, a constant stream of passers-by and many, many other people that I didn’t get chance to identify or say hello to (some of whom, I discovered later, I know via Twitter but have never, to my knowledge, actually met). I ate more pastries, consumed more coffee, stuck my headphones back on and got back on with the noises.

I have to admit, the unveiling was something of a big moment for me. To be on the doorstep of an icon of electronic music and a personal hero, to be involved in something as special as this for someone who for years was largely unrecognised – that was a big deal for me.

And obviously for everyone else as well, as something of a minor camera-scrum developed for the actual unveiling. 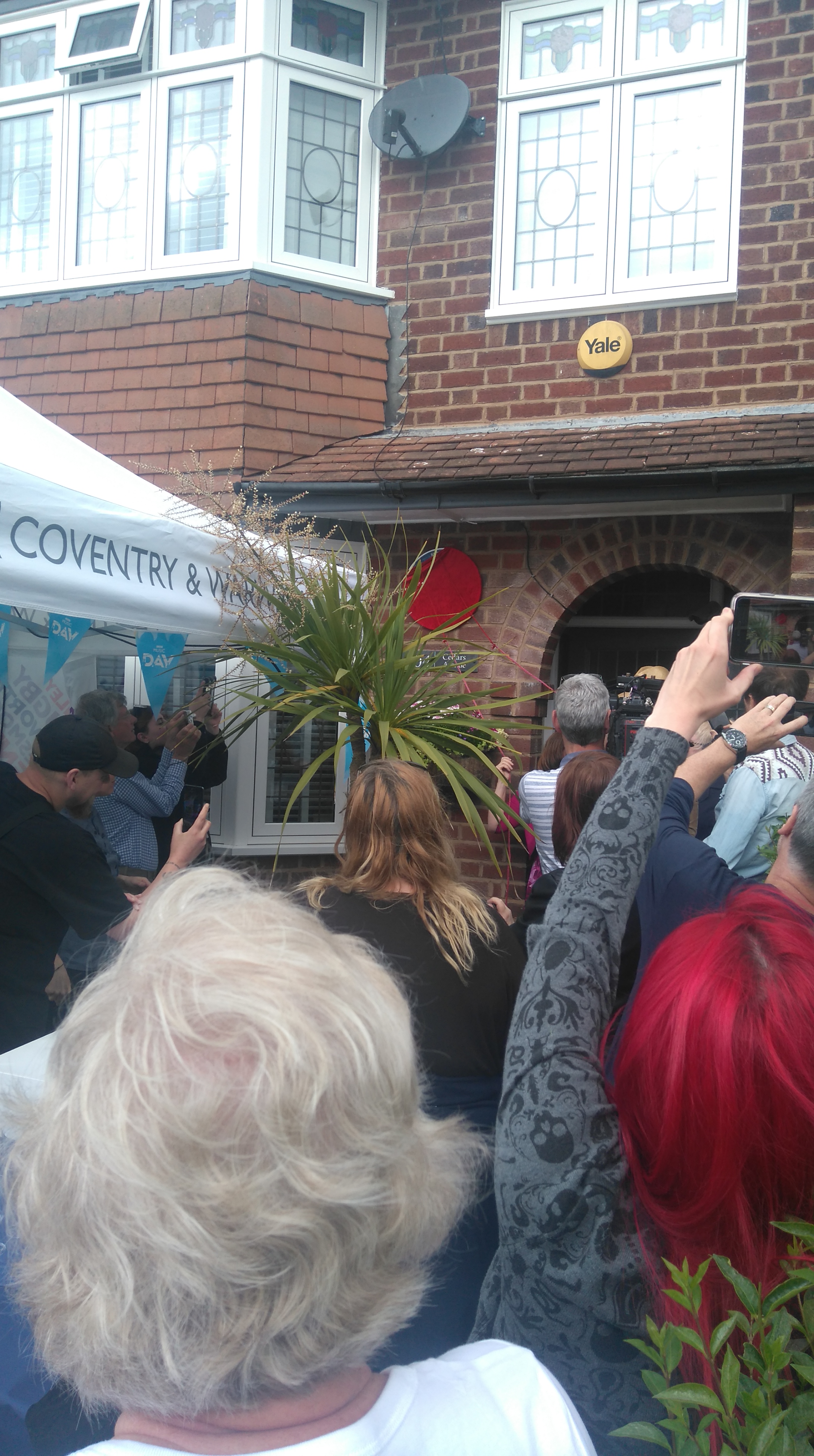 The plaque itself is a lovely piece of work:

… as was the accompanying cake!

It was at this point that it got very, very surreal… when Colin and Nicola joined me at the pile of noise-toys and we all went mad pushing buttons, twisting knobs and generally maxing out the synth-y goodness.

As I say: me and Dr Who, camped out on Delia Derbyshire’s doorstep, noodling with synths. On live radio. With cake.

You couldn’t make it up.

Finally, the show wrapped, played out live by yours truly. What a truly wonderful way to spend a sunny Thursday in June.

The treats didn’t stop there, though…

Andy Wolf, the current owner of the house, very graciously gave me a tour of the house, including his home studio. Now, I’m obviously keen to visit a fellow muso’s place of work at any time, but… Andy’s studio is in Delia’s bedroom. Even though I’m a fervent atheist, this felt almost holy to me, and I’m supremely grateful to Andy for letting me take a look around.

Oh, and my social media went mental. I burnt through a fully-charged phone battery twice in the following 18 hours, just from the sheer volume of notifications. How do people that have this going on all of the time get anything done?

Here are the pre-recorded bits that I did for the show.

The show in it’s entirety is available for a limited time on the BBC Coventry & Warwickshire website. At time of writing, I’ve not even found the time to listen to it myself so I’m kind of taking it on trust that I don’t embarrass myself too heavily.

And here’s the BBC Midlands Today TV piece that covered the event. I’m on-screen for about 0.9 nanoseconds. Fortunately, I don’t seem to be stuffing myself with BBC catering at the time.